One of the best parts of living in Seattle is that if you happen to be a bit of a lazypuss like myself, and you already live in a pretty good neighborhood, like I like to think I do, you’re really not required to travel much. Add our lousy traffic and complicated topography filled with bridges and water at every turn, and leaving one’s cozy little hamlet begins to seem less and less attractive. Which is why you can easily say things like, “Capitol Hill, I haven’t been there in months.” And it will be true.

I used to live on Capitol Hill. A hundred years ago I might even have passed as a hipster. Probably not, but I’d like to think so. I definitely had little black glasses and wore lots of plaid. Today, venturing there usually means I’m having dinner or drinks with other middle-aged folks. We have confirmed reservations, we’re probably paying for parking, and we’re all safely tucked into our beds by midnight.

Promising not to be lame in the pursuit of sandwich perfection, I decided to venture out of my comfort zone to the Hill for what had been described as a delicious sandwich experience: the Honey Hole. I do love the name, and the menu promised some great looking stuff. Cleverly named sandwiches like The Corleone (Painted Hills pastrami, sauerkraut, swiss) and the Buford T. Justice (pulled pork, house-made bbq sauce, coleslaw) successfully beckoned me forward. 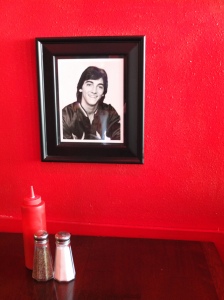 Once “in the club”, so to speak, I decided it was my duty as a die-hard Scott Baio fan to hone in on Chachi’s Favorite. I was excited about the ranch sauce, as well as the natural turkey breast roasted in-house.

Truth be told, I was pretty disappointed by a few things. First, the ambiance of Honey Hole. I get that you’re a divey Capitol Hill space and that’s your jam, but I’m just going to say, you are not very clean. Sticky floors, dirty tables, and the restroom scared me. If I see stuff like that in the front of the house, I’m very much wondering what’s going on behind the counter.

Second, my friend and I seemed to get an extra side of attitude with our sandwiches that I don’t recall ordering. This is not a coffee shop. You are not a barista. You sling sandwiches for a living, and while I’m sure you’re much wittier, smarter and more erudite than your current gig would lead us to believe, all you really have to do with sandwiches is get the order right and try to be nice. Easy!

Sadly, my biggest issue with the Hole was with the sandwich itself. It’s kind of odd to heat up chunks of white-meat turkey breast with a bunch of white sauce and serve the whole thing with white cheese on white bread. If you’re going to do that, at least make the mixture more of a “salad” situation, throw in some celery, onion, black pepper, pickles?  It desperately needed something to jazz it up. The ranch – which I think I already mentioned I was so excited for – had no tang or kick to it at all. This is a crime.

All in all, it wasn’t horrible, but it also wasn’t great. I’ll definitely give it another try, because I’m hoping this visit was just an odd combo of ordering the wrong thing and a grumpy staff day. Honey, you probably deserve a second look.

Sandwich Intelligence for the Emerald City