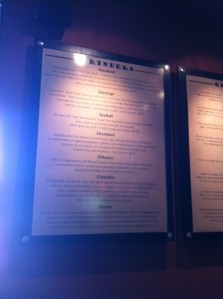 Grinders on Aurora Avenue North, conveniently located across the street from Costco at the Seattle/Shoreline border, has long been my white whale of sandwich shops.

Long before I devoted this blog to the sandwich arts, I endured the rhapsodic musings, the lore, the rhetoric, the downright fanaticism of the loyal Grinder’s patron. The meatballs, the marinara sauce, the peppers, the rolls. This place had people taking off work early, driving in from the Eastside, I even knew one guy who’d taken a sick day just to enjoy one of these bad boys.

I’ll admit, I was skeptical. Technically speaking, Grinder’s is a haul. And while I do go to Costco a fair amount, I’ve never been in the mood for a grinder after shopping there, because I’ve obviously just eaten some really bad pizza. Also, until recently I’ve not been sure what a “grinder” is, exactly? Other than some vaguely East Coast/mobster thing.

The Grinder’s Hot Sands website actually has a nice description of what a grinder is and isn’t, as well as the WWII origins of the word, and helpfully lets people know that their establishment is not a strip club. Which is nice, because the name could be confusing to the regular Aurora denizen.

My pursuit of a grinder education led me to try the offerings at a lesser known Seattle establishment, which for the purposes of providing fair and balanced journalism must remain nameless for the time being. I decided I needed to comparison-shop. 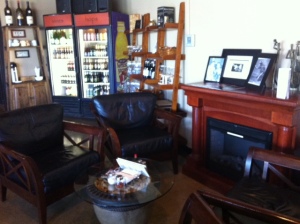 So, off I went. With all the outside ambiance of a mini-mart, but a convenient parking lot, I expected Grinder’s Hot Sands to be a no-frills, New York-style deli with lots of yelling and synchronized line-waiting. When I went in with loins girded, however, I was greeted with a large, light-filled space complete with plenty of tables and chairs, and even a few leather armchairs surrounding, wait, hold on…is that a fireplace?

After consulting the staff on my order, I think the management at Grinders must be doing something right. Both times I went there, the staff could not be nicer. They are friendly, patient, and they are really proud of their sandwiches. Always a good sign.

For my first time I tried the meatball, thinking I should go classic. At a cost of $14 with tip, I also decided it must be huge, and/or really good, preferably both. 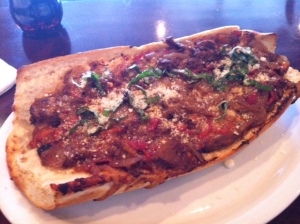 I was not disappointed on either score. My sandwich was brought to me by the aforementioned charming staff member, on a large platter accompanied by a knife and fork. Which is good, because there is no other way to eat these things.

Soon after, a box appeared, which was also good, because, please, a family of four would be stuffed after sharing one sandwich here. Typically I’m not a fan of giant portions, but at Grinder’s, it just felt right.

On my second visit, I tried the Gilbano, their take on a Philly cheesesteak. Steak, spicy peppers, gorgonzola, and carmelized onions. This sandwich was also fantastic, but a bit too spicy for me, a self-confessed heat wimp.

Moral of this white whale tale: leave work early, come hungry, bring a hungry sandwich buddy or prepare to eat leftovers all week, but make the trek. You’ll be glad you did.

Sandwich Intelligence for the Emerald City